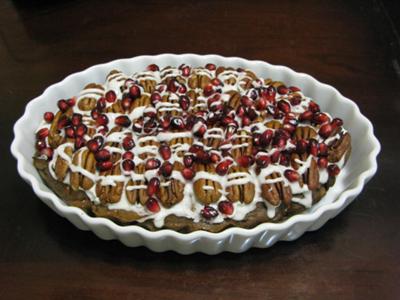 To avoid detection from Captain Carol of the Sugar Detectives Squad we used a French cheap chocolate that's about half vegetable oil so we could say there was no need to add oil or sugar to the recipe!

Then we used as the base for brownies, adding some vanilla, raw sugar, 2 beaten eggs, and a little baking powder and some flour, with plenty of pecans.

Topped with royal icing and pecans, drizzled with icing and then covered in pomegranate seeds.

Join in and write your own page! It's easy to do. How? Simply click here to return to Submit your Favorite Recipe.